At its July 25 meeting, Asheville City Council voted unanimously to dip into the city’s “rainy day” fund to cover a $441,000 overage to the $850,000 transit allocation it had just approved, as part of the new city budget, on June 13.

The budget overrun is being caused by overlapping monthly payments that will occur as the city phases out its existing contract with Transportation Services of America, its present bus service provider, and phases in a new agreement with McDonald Transportation Associates.

The funding request is the second financial “oopsies moment” council has experienced within a month. The first was the revelation, at the June 27 meeting, that bids for work on the River Arts District Transportation Improvement Project (RADTIP) had come in at $26 million over budget. That piece of news resulted in the scrapping (the city says “delay”) of most of the RADTIP game plan and is now being referred to as “the RADTIP crash.”

But whereas the RADTIP miscalculation, huge as it was, involved only future numbers on a spreadsheet and the cutting back of huge portions of the RADTIP plans, the additional transit funding is cold cash that must be plugged into a very real budget hole to pay for very real services.

And to do that, council has now voted to dip into the account officially designated as the general fund unassigned balance. That’s the city’s prudent reserve, a.k.a “the rainy-day fund.”

Law requires the city to keep and maintain a percentage of its annual budget as a hedge against emergencies. In Asheville’s case the state-mandated amount would be 8% of total budget, but the city’s own ordinance sets the bar higher, at 15%. That amounts to $18 million at present.

A memo to council from the Assistant City Manager Cathy Ball, dated the day of the meeting, notes that the $441,000 appropriation would bring the reserve figure down to 14.6%, “slightly below the policy target.”

Nevertheless, observers say, “slightly below” is still below and indicates that perhaps, the City has exhausted its other funding capabilities.

But what about the budget excess?

This year’s budget projected a $1,181,000 overage, meaning the City, after accounting for all of its expenses and capital improvement project cash needs this year, would have an EXCESS of approximately $1.1 million. This money could have been put INTO the rainy day fund but instead was immediately allocated in each budget worksession. In other words, the City could have saved these funds and added to their “savings” account but went ahead and spent it. What did they allocate it for? See below 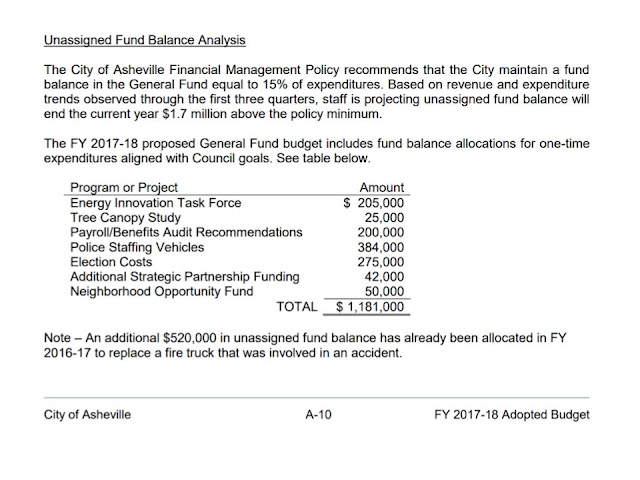 Once again, as on June 27, it fell to Assistant City Manager, Cathy Ball to bear the message and take the heat, even though her boss, City Manager Gary Jackson, who was absent last time around, was sitting in his accustomed seat on the council dais.

Standing at the same lectern where she delivered the news about the $26 million, Ball delivered a power point presentation that outlined the city’s decision to hire McDonald, highlighting the additional and better services the city would be getting through a turnkey plan as opposed to the current fee-based arrangement. She related the turnkey approach was approved by the city’s finance committee last September and mentioned the constraints the city had to work under to insure receipt of Federal Transportation Authority funds.

Ball then handed off to city transit projects coordinator Elias Mathes, who repeated that adhering to FTA regulations “wouldn’t allow any further amendments [to the contract] that would reduce costs.”

Next up was the city’s chief financial officer, Barbara Whitehorn, who said the $850,000 budget figure approved on June 13 was just “an estimate based on where we thought we might land. We knew that wouldn’t be exact … once the [transit] contract was decided we went back and looked at the whole budget.”

“So,” said Vice Mayor Gwen Wisler, “It’s July 25. We approved the budget on June 13. Why the big miss? Did we not have any sense of what these numbers were going to come in at?”

(It was almost an instant replay of a June 27 exchange in which Wisler asked Ball, “Why didn’t the staff let the council and the public know about the size of the overrun?” and Ball replied, “That’s a fair question.”)

“We didn’t [know] really,” Whitehorn replied. “Probably Cathy can speak to that a little better than I can.”

So Ball returned to the podium.

“Until June 30th we did not know the answer to that [what the size of the overage would be],” Ball told Wisler. “We received best and final offers on June 12 and had to go to committee at that point.”

Wisler: “So knowing that we [already] had a budget in place the committee still was just okay with a $440K overrun?”

Ball: “We were not allowed by FTA to make that a consideration.” She returned to her seat.

But then, from normally quiet councilman Brian Haynes: “I would just like to know why we didn’t see this contract before today.”

Ball trudged back to the lectern.

“We typically would not bring a specific contract to council,” she said. “We generally just present you with a resolution asking the city manager to execute it.” Ball said this case was different because it happened that “We did have a contract [to satisfy FTA] already prepared, so you got to see that.

“So it’s not that we weren’t trying to be transparent,” she said.

To followers of council procedure, Haynes’ question begged another.

Up until the morning of the council meeting the motion to allocate the $441,000 to pay for the transit overage had been tucked away deep inside the meeting’s consent agenda, a list of routine business items, submitted by the city manager, that are usually dealt with en masse by a single approval vote.

But that item was missing from the agenda that was circulated just before the meeting. Instead, Mayor Esther Manheimer noted that the funding motion had been broken out separately and would be discussed in open session, complete with an opportunity for public discussion.

What prompted council to pluck that piece of business out of the city manager’s laundry list and present it by itself is not known.

Not with a Bang; Not Even with a Whimper

Whatever the case, council member Julie Mayfield moved to approve the budget amendment and was promptly seconded by councilor Cecil Bothwell. The mayor then opened the floor to public discussion.

Council then voted unanimously to approve the measure. “I hope this is going to get us to a better place,” said Mayfield.

The question was dealt with in just under 25 minutes.

Skyrocketing Cost of the UNC System